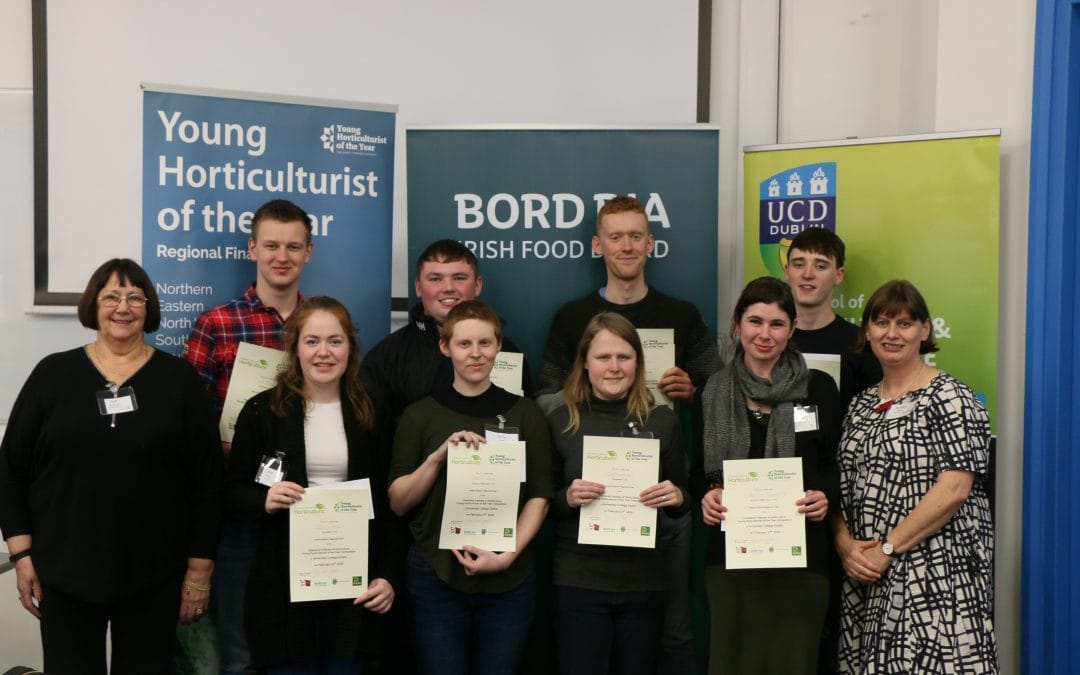 The Chartered Institute of Horticulture annual Young Horticulturist of the Year (YHoY) 2020 competition completed its local heats earlier this year in all the horticultural colleges covered by the Ireland branch (North and South). Over 200 young horticulturists, under the age of 30, competed for just 8 places in the regional final.

The 8 students with the highest scores from the local heats competed in this year’s Ireland Final which was held on 27th February 2020.  Our hosts this year, the Department of Agriculture and Food at University College Dublin, provided a warm welcome to competitors and supporters.

The day-long event started off with a tour of the award-winning Evolution Garden, led by one of the garden’s creators, Dr. Caroline Elliott-Kingston.  The garden, which represents the evolution of plants over the 500 million years since they first appeared on Earth, was the brainchild of Prof. Paul McCabe, and was designed by Dr. Elliott-Kingston and architect Nicola Haines.

The large crowd of supporters – families, fellow students and staff – then proceeded to the Auditorium to support their star horticulturalists in the quiz.  While the atmosphere was competitive, the warmth and skill of quizmaster Dr. Paul Fitters put all the contestants at ease.  In a closely-fought and challenging quiz, Aoife nic Fhionnlaoich from Teagasc College of Horticulture, Glasnevin, emerged the eventual winner. Only 2 points separated 2nd and 3rd placed contestants, Seán Murray and Kelly Doaks, from Kildalton College and Greenmout College respectively. The overall order of all of the contestants at the end of the quiz was:

Prizes were presented by Susan Nicholas, Vice-President of the Chartered Institute of Horticulture, and by the YHOY Regional Co-Ordinator, Dr. Sandra Austin. Our winner, Aoife, won a voucher for €200 (courtesy of Bord Bia), garden tools (courtesy of Bulldog), the essential book, ‘Plant Names Simplified’, and an additional prize book, Jimi Blake’s ‘A Beautiful Obsession’, kindly donated by Dr. Mary Forrest.  Aoife will represent Ireland in this year’s YHOY Grand Final which has now been rescheduled to 24th September 2020 in Edinburgh due to the Coronavirus outbreak. We wish her all the best. The overall winner in the Grand Final will win a travel bursary of £2500, sponsored by the Shropshire Horticultural Society.

The Ireland Branch of the Chartered Institute of Horticulture is very grateful for the continued support and sponsorship from Bord Bia, without whom it would not be possible to host such a wonderful event.