We are delighted to announce that this year’s speaker for the Lecture will be John Richardson of Johnsons of Whixley Ltd. 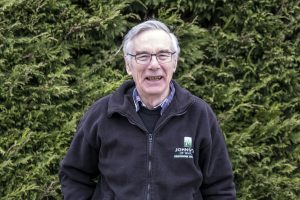 John grew up on a relative’s market garden near Wakefield. He was motivated to develop his interest in growing by undertaking the 2-year Diploma Horticulture course at Writtle College in Essex. There followed 6 years of practical and advisory experience in East Yorkshire, Surrey and Scotland before purchasing the 6-acre retail nursery, Johnsons of Whixley Ltd., in 1964.

The wish to increase production encouraged him to drop retail sales in 1971 and concentrate solely on sales to trade customers. Production areas jumped from 9 acres at the outset, to 65 acres in 1973, and 150 acres by 1985.

John’s 3 sons joined the company after significant work experience in the UK and Europe, each developing specific areas of the business by customer, location and format. Personal relationships were developed with landscape architects and contractors to ensure customer satisfaction. This required the increased purchasing of plants from Europe to satisfy the expanding requirements of landscape specifiers. And the move away from traditional hardy UK species.

The family are staunch supporters of the HTA and other industry promoting activities but, as garden centre groups became more assertive, Johnsons developed their own promotional activities, supported by our next generation.

John slowly handed over the reins to Andrew, Graham and Iain, assuming the title of Chairman in 2000, which enabled him to concentrate on Quality and Environmental systems, which are a fundamental activity of the company.

The company is now one of the largest suppliers of plants to the UK amenity sector.